One day in January, I was enjoying 30 degree sunshine and learning to cook Thai food at Baan Thai Cookery School in Thailand. While I was there I met a Anne-Sophie from Kitchen Trotter, who was excited to tell me all about the brand and product which, at the time, was yet to launch in the UK. Well I’m very pleased to tell you, Kitchen Trotter UK has launched and I got to try it! 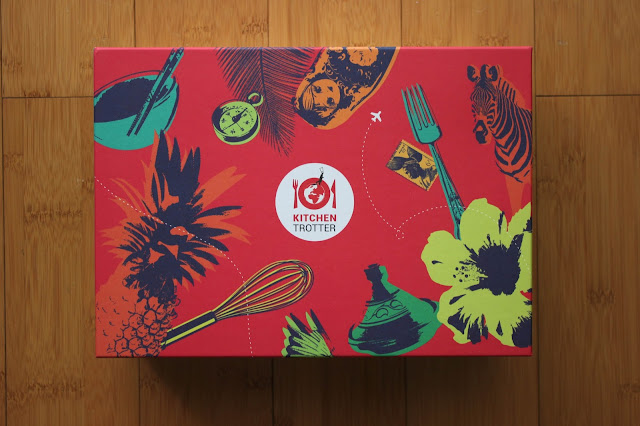 The Kitchen Trotter concept is simple. Every month, you’ll be sent a box with specialty ingredients from a particular world cuisine, and a recipe guide for using those ingredients. I was sent the box of for Indonesia! Aside from a repeatedly practicing Pad Thai, and my delicious spring rolls, I had never made any other South-East Asian dishes. 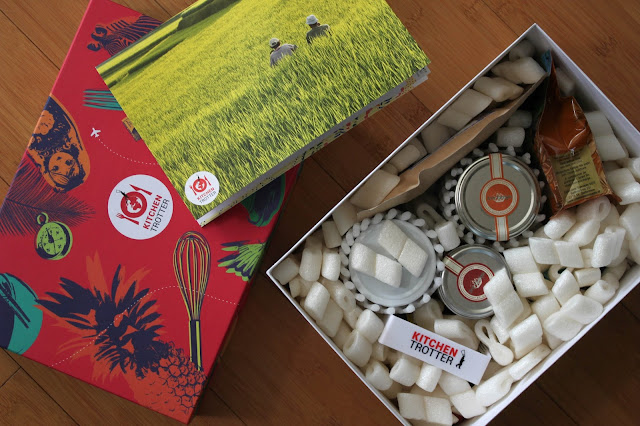 My Indonesian recipe book included a starter salad called Gado-Gado, a noodle main course called Mie Goreng, a curry called Ayam Areh, and a dessert called Kue Dadar Gulung. I decided to go for the Ayam Areh as I had most of the other ingredients at home already. It didn’t look like the most exciting meal in the world, and I wasn’t sure I would even like it, but I’m glad I gave it a chance. 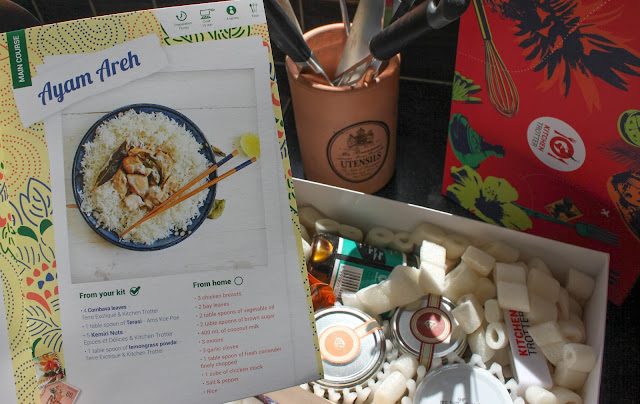 Recipe for Ayam Areh by Kitchen Trotter.
From the box of supplies you will need:
4 Combava leaves (from my research these are kaffir lime leaves which you can find in most supermarkets in the UK)
1 tablespoon of Terasi (shrimp paste)
5 Kemiri Nuts (also called candle nuts)
1 tablespoon of lemongrass powder
In addition to that you’ll also need:
3 chicken breasts (I used thighs as I prefer them)
2 bay leaves
2 tablespoons of vegetable oil
2 tablespoons of brown sugar
400ml of coconut milk
3 onions (I used one large onion and half of a smaller one)
3 garlic cloves
1 tablespoon of fresh coriander, finely chopped
1 cube of chicken stock
Salt and pepper
Rice 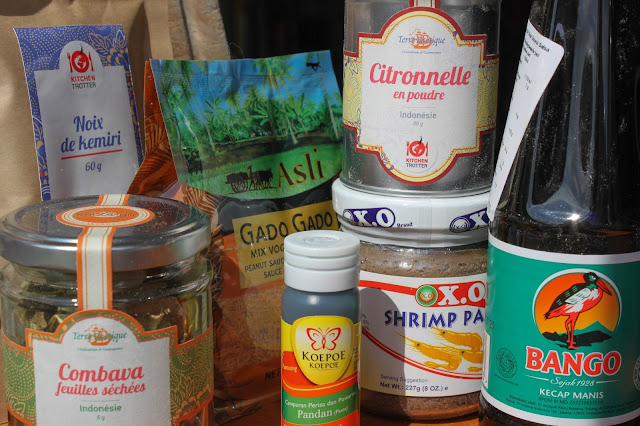 In a food processor or blender, mix the onions, garlic, the kemini nuts and terasi. When a semi-liquid paste is obtained, set aside. Terasi is actually shrimp paste, which gives the dish a very unique flavour and smell. I think you could get away with using slightly less if you’re not keen, but I don’t think it’s something that can be replaced in the dish.
Boil 200ml of water and add to the stock cube. 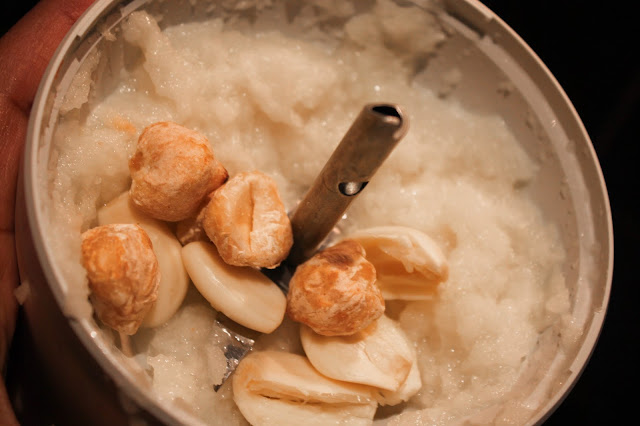 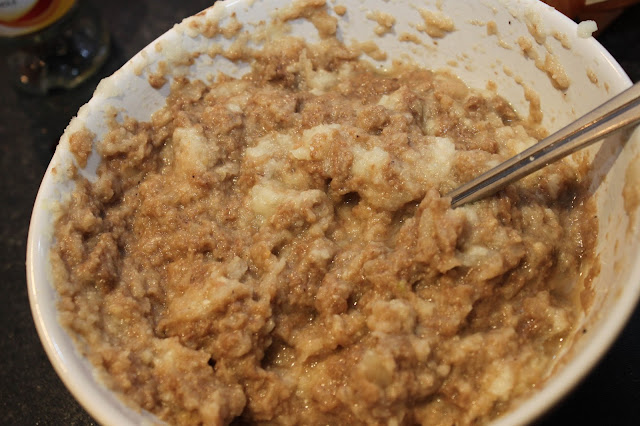 Dice the chicken. Heat the oil in a pan set over medium heat. Add the chicken and cook until slightly brown. 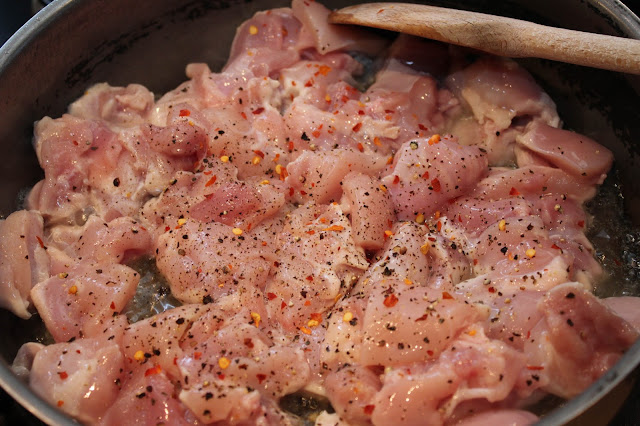 Pour in the onion mixture and stir until heated through. Add the coconut milk and the stock and stir well. Then add the brown sugar, the bay leaves and the combava leaves (slightly crunched to release more flavour), the lemongrass powder, the coriander and stir well. Season with salt and pepper according to taste. 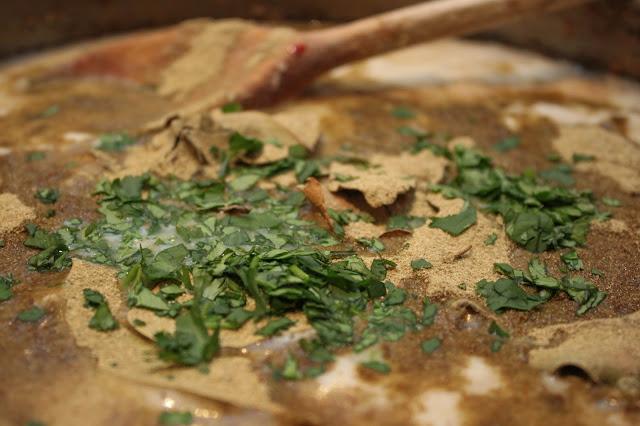 Simmer set over a low heat until the sauce thickens, approximately half an hour. Stir regularly. Cook your rice in this time – I did brown rice rather than the white rice pictured in the booklet.
Et Voilà! One Ayam Areh (translates to chicken in coconut milk apparently). Not the most attractive thing I’ve ever made, and with the shrimp paste it’s probably not the best smelling either, but I actually enjoyed it. A combination of flavours I’m not really used to, but elements of South-east Asian cuisine I remember from Thailand. 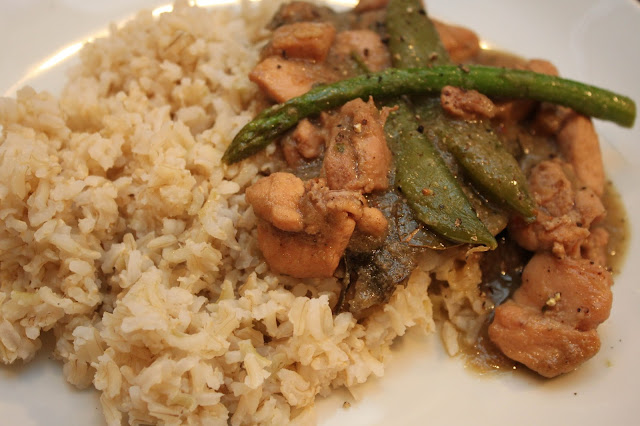 I think the Kitchen Trotter concept is great, and encourages people to get out of their comfort zone in the kitchen, or even to get into the kitchen in the first place. The recipes in the booklet are easy to follow, and there’s information about all the ingredients you’re given.
I think some food subscription services are a bit lazy, sending ready made dishes to your door, especially if you’re looking for something fresh and healthy. If you use a food subscription service for convenience then great, but if you’re hoping to expand your culinary palette, and really learn about food then you need to get stuck in! 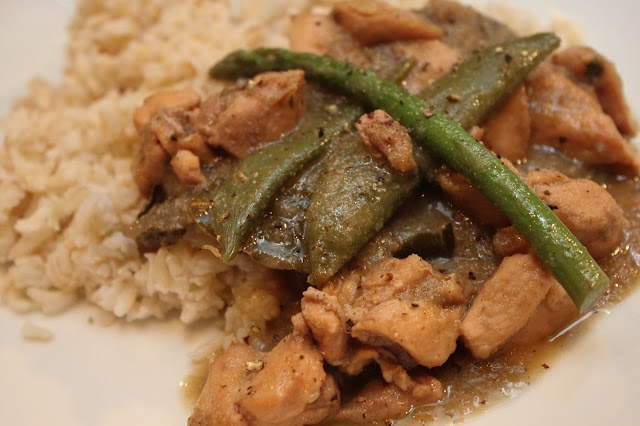